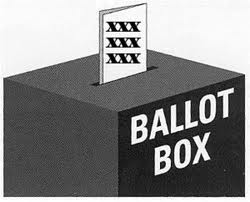 Combine the Republican efforts to deny Democrats their votes by wiping them off the voter rolls with voter suppression, and voter intimidation and you get the Perpetual Republican Government that Conservatives have lusted for.

Most people have three asumptions about recent Presidential elections: 1. The Supreme Court had to intervene in the Bush-Gore Election "on the grounds that if it continued, Bush could suffer "irreparable harm," 2. the recount conducted by independent media sources showed Bush would have won anyway, and 3. Bush won the 2004 re-election hands down.

Yes, the elections have passed; yes, it's too late to do anything about them; yes, Conservatives love to bleat, "Get over it." But it can happen again - especially if no one knows it happened in the first place.

All three notions are nonsensical, and because a new book may soon be published exposing the third Old Wives Tale, and others, let's take a look at the third fable first.

On Democratic Underground, a writer under the name of "Time For Change" posted the following article, "Was the 2004 Presidential Election Stolen Too?" (http://www.craticunderground.com/1002849077 )

Time For Change says, "I'm currently working with a publisher, Biting Duck Press, to publish a book (title as yet undetermined) on the corruption in our election system.  We hope that it will help to make Americans more vigilant and concerned about the way our elections are run. I’ve drafted most of the book.  I am currently intending to post large portions of it on DU, in the hope of stimulating discussion and obtaining useful feedback.  I have previously posted a draft Chapter 1 of the book, concerning the stealing of the 2000 Presidential election in three parts. this post begins Chatpter 2."

After reading the following short exerpts, I urge all of you to read the entire post, and to support the author in his attempt to publish what seems to this reader a very important piece of scholarship. 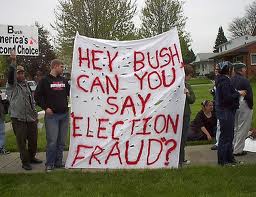 The reduction in Bush’s lead following the machine recount was due almost entirely to the addition of Gore votes in counties that used punch card voting machines. As punch card machines get old they become less efficient at what they are supposed to do – punch holes in ballots. Consequently, use of the older machines often results in failures to fully punch a hole in the card. In some cases the hole may be nearly complete, so that a piece of cardboard (called a chad) is barely hanging from the card, in other cases there may be just a small hole in the card, and in still other cases there may be no tear at all, but only a little dimple. The vote counting component of the machine can only count votes for hole punches that are complete, that is, where any remaining cardboard material is not covering the hole. Thus it is that failures to punch complete holes in the card reduce the vote count. But the act of running cards through the machine a second time tends to cause stray pieces of cardboard that are only loosely attached to the card to fall off, thus enabling the machine to read the ballots as votes where the hole is punched.

For a variety of political reasons, poor areas generally have to make do with older machines than wealthier areas. Consequently, poor areas are generally characterized by a much greater number of undervotes (ballots that register no vote because the hole is not complete) than wealthier areas. Since poor areas tend to vote Democratic, that means that Democratic candidates tend to suffer from this problem. Thus it was that as the cards were run through the machine a second time and many of the hanging chads broke off, the Democratic candidate, Al Gore, gained ground.

This is a problem that almost routinely occurs in almost all elections that use the Votomatic punch card voting machines, not just the 2000 Presidential election in Florida.

The great majority of arguments that the Bush team made for public consumption were not made in their court challenges because they knew that no court would buy them. In court they argued:

1. The count was unfair because only selected Democratic counties were chosen by the Gore team.

2. The law specified that the count should take place only when there was a demonstrated problem with the machine count.

3. The count was unfair because the standards for counting votes varied between one county and another, and there were no uniformly agreed upon standards. As such, it violated the equal protection clause of the U.S. Constitution by applying different standards to different voters.

Gore team arguments to continue the recount and extend the deadlines
The main Gore argument was that Florida law required that counties be given the opportunity to hand count votes in a close election. Given that, the part of the law that specified a deadline for certifying the returns did not make sense because it did not leave enough time to count the votes. The Bush team had no real counter argument to that (in my opinion), other than to reiterate that the law specified a deadline.

In court the Gore team rebutted the above noted Bush arguments with the following:

2. With regard to the issue of a demonstrated problem with the machines, the Gore team noted that there were in fact problems with the punch card machines, as it was demonstrated statistically that counties that used them had five times the undervote rate as counties that used other voting methods. Furthermore, the very fact that the first machine recount resulted in many additional Gore votes, and that the hand counting so far in every disputed county resulted in many additional Gore votes was further indication to this effect.

3. With regard to standards, the Florida statute said plainly that the ballots shall be evaluated to determine the clear intent of the voter. True, that statement could and was in fact interpreted in different ways. But that is what the statute said, and it was up to the individual counties to decide how to interpret it. With regard to the issue of equal protection, how could that even be an issue? It was obvious that different voting methods were used in different counties. So how could different ways of evaluating the votes make protection less equal? In any event, it seemed clear that hand counting the Florida ballots made the protection more equal than it would be without any counting at all. 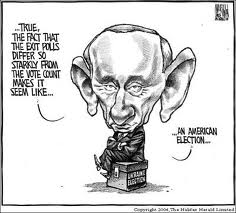 (From another site, http://archive.democrats.com/display.cfm?id=181, showing the results of the Media Consortium recount, widely reported by the "liberal media" to have been won by Bush.)

The Media Consortium hired the National Opinion Research Center to examine 175,010 ballots that were never counted in Florida. The investigation took 8 months and cost $900,000. No matter what standard for judging ballots is applied, Gore wins.


Unfortunately, the members of the Media Consortium insisted on distorting the analysis of their own clear data (see "Spin Control" below).

Without counting a single hanging or dimpled chad, Gore won by 662, according to the Miami Herald. The votes below were crystal clear votes as determined by the Herald's accounting firm, BDO Seidman. Under Florida law, all of these ballots should have been counted by election officials on Election Day. Their failure to do so is Official Misconduct, not "Voter Error"!


Unfortunately, the Herald insists on distorting the analysis of its own clear data (see "Spin Control" below).

3. Other Media Counts Lead to the Same Conclusion

You can see the same data in greater detail here:

If every county in Florida - not just the Republican ones - had state-of-the-art voting machines that allowed voters to correct their mistakes, Al Gore would have won by 46,466.

The final frosting on the cake was the book by life-long Republican and prosecutor, Vince Bugliosi, in his classic, "The Betrayal of America."  Luckily for us, the precursor to that book in The Nation magazine, "None Dare Call It Treason," is available for free here --> http://www.thenation.com/article/none-dare-call-it-treason#.

Treason is a strong word to use, though is misused by Conservative every day of the week.   Take a peek at the article and judge for yourself whether the reactionary wing of the Supreme Court doesn't indeed deserve that chilling appelation.

If so, treason by the Conservatives certainly merits the criminalizing of Conservatism.