Charles Darwin had his Alfred Russel Wallace,  Marx had his Pierre-Joseph Proudhon, ("Pierre-Joseph Proudhon (1809-1865), though more properly considered an anarchist, articulated a hostility toward capitalists that was echoed in the writings of many socialists. His slogan "property is theft" was a handy, if inflammatory, summation of the labor theory of value, and much influenced popular socialism among the working classes. However, like the majority of socialists and Communists, he was not strictly opposed to all private property: one should be free to own one's own home and domestic goods, for instance. What he objected to was property used to extract wealth from the labor of others: factories, mines, railroads, etc." - Introduction to 19th-Century Socialism.), and "Criminalizing Conservatism" was preceded in a way by "Ban The GOP," a prolific poster on the "Democratic Underground." 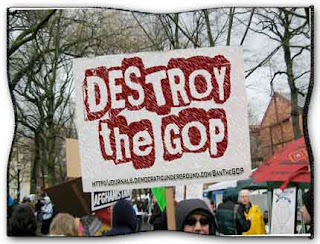 BanTheGOP.com has the anger needed to cheerlead the removal of such a huge network of crime that Conservatism presents: