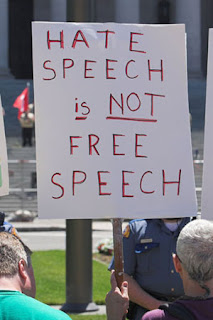 The most common objection to criminalizing Conservatism is the First Amendment "Free Speech" issue - even by those on the left.  The second most prevalent objection, also promulgated by Progressives who should know better, is the perception that a two-party system is sacrosanct - a joke to those in other countries who have had a long history of multiple parties. (http://www.politicsresources.net/parties.htm)  And he number of progressive factions who can replace the front group Republican Party should the outlawing of Conservatism be combined with campaing finance reform to eliminate legalized fat-cat bribery is legion.

The free speech issue must be looked at in a new context.

"Exceptions to free speech have arisen over the years when the government has decided the speech could cause substantial harm to the public, is not speech originally intended to be protected by the Bill of Rights, or other case-specific reasons. In any event, when deciding whether an instance of suppression of free speech is constitutional, the courts must weigh the importance of the freedom of speech against potential dangers if the speech is allowed." (http://www.legalzoom.com/us-law/freedom-speech/free-speech-primer-what-can)

In a recent article by Chuck Goudie at the dailyherald.com , Mr. Goudie noted:

"Perhaps more than any other part of the Constitution, the First Amendment right of "free speech" gets cited by Americans.

"From an eighth-grader suspended for recording a song about why his teacher should be dead to the gay community members whose parade has been rerouted, the chorus sounds the same: ‘My right to free speech is being violated.’

"The problem with that is: The Constitution doesn’t guarantee you ‘free speech.’

"Despite what many seem to believe, the ‘freedom of speech’ guarantee in the Constitution doesn’t give you the right to say anything you want, anywhere you want.

"The First Amendment makes it unconstitutional for government to suppress speech (and ‘expression’ as it has come to include). That’s it.

"There are numerous exceptions to that, well beyond just the popular citation of the ‘yelling fire in a crowded theater’ kind of speech that is prohibited. Under the Constitution, the courts allow for many types of dangerous speech to be regulated or banned by law.

"Child pornography, defamation and inciting crimes are just a few examples of speech that has been determined to be illegal under the U.S. Constitution." 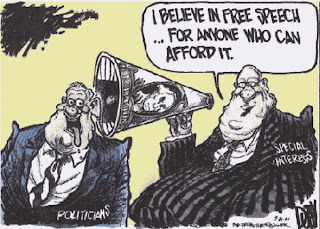 Congress's ability to criminalize Conservatism will not be based on a new, radical definition of free speech, it will be derived from precedent that outlaws speech that is dangerous to the health of the majority of the people in a free society.

Just a short list of Conservatism's recent crimes against our citizenry include the blocking of cancer screening for women through the War On Planned Parenthood; the increase of children's malnutrition due to cuts in Food stamps; lives ruined by refusal to provide abortions to women in the military who are victims of rape; and homicides through lax gun laws in the guise of "gun ownership rights."

Another short list of crimes if we go back in time:  add our military deaths and the Iraqi civilian deaths in Bush 43's Iraqi invasion to the list, another boon to the defense industry, and unwittingly named (O)peration (I)raqi (L)iberation until it was hastily changed to Operation Iraqi Freedom; a myriad of tax policies causing misery to the poor and middle class; and vote theft, voter suppression, and voter intimidation that may still prove to be a factor in the 2012 Election.

To detail just one example of the Conservatives machinations in Congress leading to death and disease for the American people, 50 million Americans are still without health care .  From Dr Wayne Smitherman at Wayne State University in a recent "Up With Chris Hayes" show, "But remember in 2010, when the Republicans took the House, one of the things that came up was they wanted $100 billion cut right away in the budget. The cut came down to $38.5 billion. What that meant was, the $250 million to build 350 new primary care sites throughout the United States was cut from $250 million to $29 million which means instead of 350 sites across the nation, we actually only had enough money in that first year for 67 sites."

This site will remain standing as long as examples like this remain, examples of the organized criminality of the Conservative leadership - remain, that is, until Conservatism is finally made illegal. Trying to list Conservative depredations through their front group the Republican Party in one sitting is akin to listing all the stars in our galaxy in ten minutes.